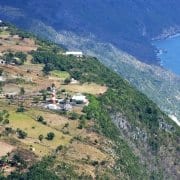 Ocho Rios Jamaica isn’t just a beautiful, tropical vacation destination. It has a long and sometimes turbulent history that make is a very special location. Your stay in the Jamaica Ocean View Villa places you centrally to the island’s most historic sites and best attractions.

Before any Europeans set foot in Jamaica the island was home to the Taino people. The Taino were a group of Arawak Indians that had been living in Jamaica for around 2,500-years before Christopher Columbus discovered the island in 1494. He is said to have landed close to what is now Ocho Rios. They called the island Xamayca and were a peaceful people, who greeted Columbus without aggression. Unfortunately, the Tainos were soon wiped out by diseases brought by Europeans and war.

After Columbus’ arrival the island was claimed by the Spanish, who started building plantations on the island and bringing African slaves to work them. It is the Spanish that settled the town of Ocho Rios, which they called Chorreros, a name that means ‘Eight Rivers’ in Spanish. Today, a popular attraction is Columbus Park, which contains historic artefacts from the period of Spanish occupation. The town remained a sleepy fishing village until the 1960s and beginning of tourism development.

The 1650s saw the start of the Anglo-Spanish wars, which resulted in both sides attacking the other’s colonial holdings. Jamaica became one of the most fiercely fought over territories. Jamaica was targeted by the English because it was yet to be well defended. They first arrived on the island at is what is known today as Spanish Town in 1655. When they had captured the island the Spanish sent for more soldiers in an attempt to win possession back. Several intense battles took place in the Ocho Rios area. One of the biggest and the second last battle is the Battle of Ocho Rios, which took place on October 30, 1657 near the beautiful and popular attraction of Dunn’s River Falls. The Spanish tried one more time to reclaim Jamaica in June 1658 are little further east from Ocho Rios at the Battle of Rio Nuevo. The battle lasted three days and was the biggest ever fought on the island. Jamaica officially became a British territory in 1670 with the Treaty of Madrid.

The Battle of Rio Nueva took place just over 6-miles from Ocho Rios. Today, to commemorate this significant date in Jamaican history the Rio Nuevo Heritage Park and Museum was built on the battle site. In the museum, you can explore the history of this battle and see artefacts that have been found at the site. In addition to the history of the battle, the museum also covers the history of Jamaica from its first inhabitants the Tianos.

In addition to Ocho Rios being the site of some of Jamaica’s most important history, it is also near some of the island’s most beautiful natural attractions. One of these spots is the Blue Lagoon. Located a short drive from Ocho Rios in Port Antonio, the shades of turquoise here will take your breathe away, it is seems almost unreal. It was made famous by the Brooke Shields movie ‘The Blue Lagoon.’ Behind Ocho Rios, you’ll find the majestic Blue Mountains. For serious hikers, who can handle the difficult terrain and humidity, a hike is one of the most amazing experiences you can have in Jamaica. If you aren’t up to a hike, there are some good viewing spots where you can relax with a drink. The most famous and popular attraction in Jamaica, Dunn’s River Falls, is right on your doorstep. It is great fun to make the climb to the top and swimming in the refreshing waters.

Please do not hesitate to contact us regarding your Ocho Rios/Jamaica travel questions and/or any special requirements. We are just as excited as you are when it comes to Ochi, so send us your questions, inquiries or make a reservation whenever you’d like.

Want to join the discussion?
Feel free to contribute!

Finding the Best Resort Town for Your Vacation
Scroll to top
Open chat
Chat with us
Powered by
Thank you for visiting our website! To serve you better, please let us know how we can help you on this chat.